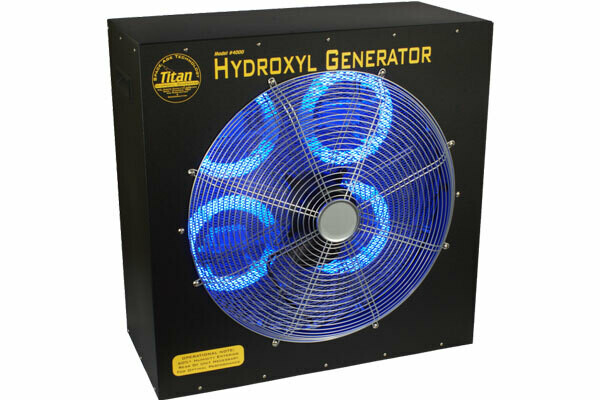 Titan 4000 Hydroxyl Generator is the only true commercial hydroxyl machine on the market. Unlike other fake Hydroxyl generators that produce ozone and are not safe for occupied areas, Titan utilizes 365nm to 385nm UVA TiO² Coated Photocatalytic Lamps and a permanent Anatase TiO² Coated Super Reactor Screen. This reactor screen is designed to hold the maximum amount of highly reactive Nano Sized Anatase Titanium Dioxide, and as a result, electron hole pairs are formed that react with H²O and O² in the air to produce Free Electrons, Hydroxyl Radicals and Ionized Hydro-Peroxides. When these molecules are dispersed by the fan they will decompose organic and inorganic gases and air pollutants into carbon dioxide and water.

Titan 4000 is rated for 40,000 cu/ft treatment area when paired with our Hydroxyl Maximizer Cold Vapor Injector .

Save this product for later